Baden bei Wien – Baden by Vienna – has never ceased to radiate an unforgettable aura: spa and summer guests, originally attracted by the glamorous presence of the Imperial Court, have always adored this setting. Industrial magnates like the “Kohle-Gutmanns” (“Coal Gutmanns”), bankers like the legendary baron Samuel Ritter von Hahn, inventors like the genius Emil Jellinek-Mercedes, and factory owners like the “Zuckerl-Hellers” (“Sweetie Hellers”) appreciated the beauty of the region and the multitude of cultural and social attractions, the theatre, the parks and the baths.
They built villas in a variety of styles – historicist, art nouveau and modernist – a fascinating mixture. Many of these families who spent their summers in Baden had Jewish roots. They shaped summer life in Baden until 1938. This exhibition here in the Kaiserhaus is dedicated to ten families and their villas.

10 families and their houses are presented in the exhibition. Click on the red dots on the city map to find out more. 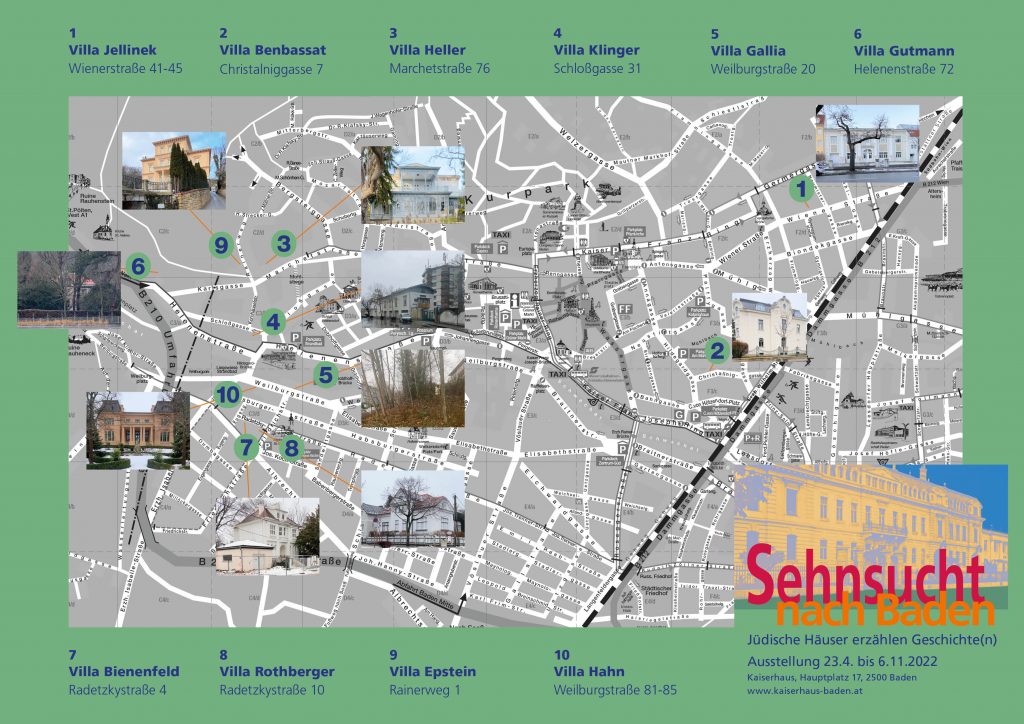 Strolling through Baden is a feast for the eye, thanks to all its beautiful villas. Planned by great architects from different eras, they sculpt the appearance of the town.

As early as 1846, the resident architect Johann Schmidberger built a villa that was extended with a striking metal veranda from the 1889 World Exhibition. The industrialist Adolph Ignaz Mautner Markhof was also one of the property owners, as was “Zuckerl” (“Sweetie”) Heller, Gustav Heller. The composer Heinrich Strecker acquired the villa after 1938.

Otto Wagner built two villas: in 1867 an imposing early work for the banker Gustav Epstein, then, almost twenty years later in 1885, the Villa Hahn took shape – likewise for a banker, Samuel Ritter von Hahn, director general of the Länderbank. Incidentally, the density of the banker population in Baden was high: among them was Albert Benbassat, who had the luxurious furnishings of his villa auctioned off in 1937 – a catalogue gives us a rare inside view into the villa interior.

One of the great architects of late historicism, Alexander Wielemans, designed the Palace of Justice in Vienna, also the Town Hall in Graz – and the spectacular villa for Wilhelm and Ida Gutmann in Baden, dated 1882. Belonging to this ensemble was a glasshouse and a bowling alley, also a salettl (from “saletta”, a kind of gazebo) and a moated chateau with grotto. Wilhelm Gutmann and his brother David were renowned as innovative personalities in coal production and merchandising, but also made a name for themselves as generous patrons and sponsors.

Jakob Gartner – also a major formative influence on the appearance of the Vienna Ringstrasse – designed a villa in Baden in 1899 for Adolf Gallia – Adolf and his brother Moriz Gallia acquired their wealth as patent lawyers, especially for the famous gas mantle.

Ludwig Baumann became established as an architect of revival Renaissance and revival Baroque; he directed the building of the Neuer Burg (in the Hofburg) in Vienna and participated in the Vienna Konzerthaus. In Baden in 1884 he adapted a villa for Heinrich Klinger, a linen industrialist and president of the Jewish Community (israelitische Kultusgemeinde).

In 1912 art nouveau advanced into Baden: in this year, Otto Prutscher built the villa of the textile merchant and department store owner Moriz Rothberger and a year later a villa on the neighbouring plot of ground for the merchant Rudolf Bienenfeld, a close friend of Rothberger’s. “Merry in colour, yellow Terranova plasterwork, bright red roof, green drainpipes, the flowers in front of the windows even more richly arrayed than at the larger house [Villa Rothberger is meant here],” thus a report in the magazine Der Architekt in 1913.

All these diverse architects have contributed to the unique flair of Baden, which to this day is still the secret of the town’s fascination and charm. 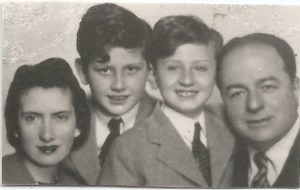 In 1930 the banker and native Bulgarian Albert Benbassat bought a villa in Baden built in 1899 by the founder of the Hirtenberger Patronenfabrik (Cartridge Factory), Anton Keller. 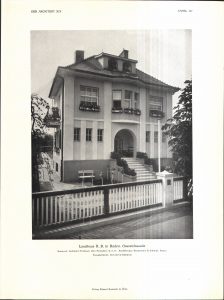 Radetzkystraße 4 The plot of land next to Moriz Rothberger’s property was bought by the merchant and close friend Rudolf Bienenfeld; they were each the 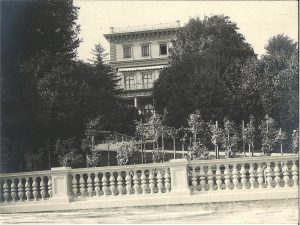 Rainerweg 1 The Epstein family was one of the oldest pre-eminent Jewish families in the Monarchy. In 1857 Lazar Epstein, owner of a cotton-printing factory 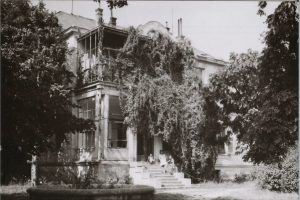 Weilburgstraße 20 The lawyer Dr Adolf Gallia was noted as one of the most renowned patent lawyers in Vienna. He was in charge of the 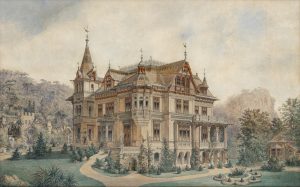 Helenenstraße 72 The Kohlen-Gutmanns revolutionised the energy market: in Vienna they organised a small-scale distribution system that provided households with coal. A huge relief for 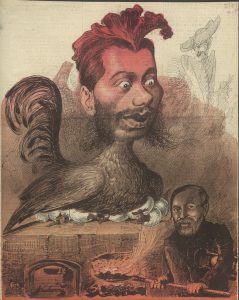 Weilburgstraße 81-85 Samuel Ritter (Baron) von Hahn was one of the most pre-eminent and flamboyant Austrian industrialists of the second half of the nineteenth century. 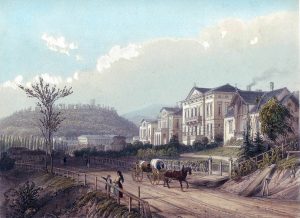 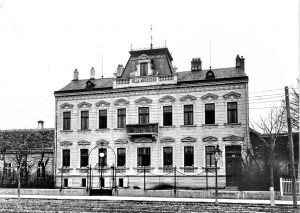 Wienerstraße 41-45 Emil Jellinek, son of a rabbi, was one of the most dazzling personalities of his time. He worked as trade and insurance representative

Schlossgasse 31 Heinrich Klinger was man of many facets: as an industrialist, he devoted his energies to the linen and jute production in Bohemia and 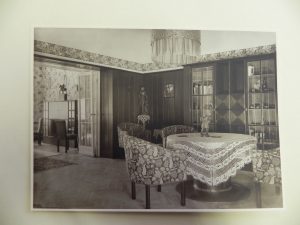